Adding extra margins may give the perception that your print is not sized correctly. Actually it will be sized correctly but treat the margins you add as just part of the image.

Recently a customer of ours ordered an unmounted canvas print of a photo she had taken.  She planned on mounting it herself so prior to sending us the file she added some extra margins which she incorrectly thought she would need to included for mounting the print. Even though the online preview of her print showed how it was going to be printed with the margins she told us that she thought we would figure out what her intent was.  The result was the area of the print which made up of actual ink was smaller than she thought because of the margins she added. The printer saw the margins she created and assumed it was part of the image.

The below diagram illustrates what happens when you supply us with an image that has extra margins embedded in the file. 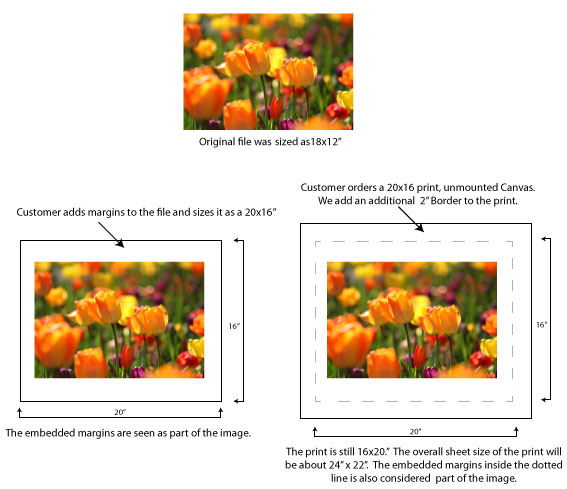 While many of our customers do this intentionally because they want to control the margins/border size of their print more, too many times customers either forget they had added some margins into their image. What results is a print which printed correctly but the actual image is smaller than the print size. Don’t forget to account for any margins prior to uploading your image.