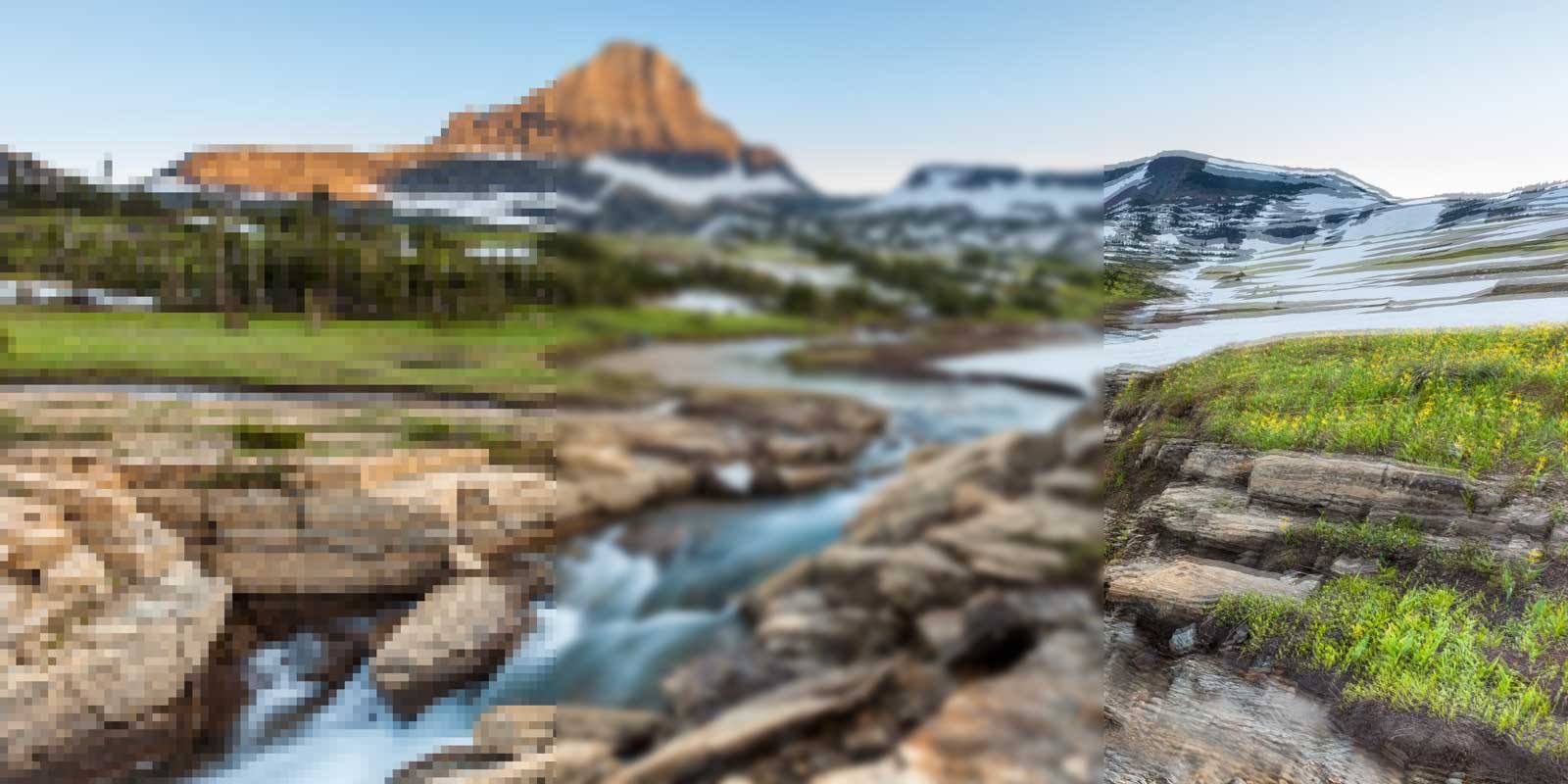 There are 3 concepts to know about this and each one means something totally different. There is pixilation, out of focus and ghosting. Sometimes when a customer tells us their prints are blurry we must ascertain which of these they are referring to since they all can are caused by different things.

What are Pixelated Prints?

Pixilation is the effect you see when you print an image file that is too low a resolution. Digital images are made up of pixels which are like little blocks of color. If you were to zoom in all the way it would probably look like a bunch of jumbled blocks of different shades. These make up the actual image just like little square puzzle pieces. The larger you print the image the more these square pieces of the puzzle are enlarged and visible. The result is a jagged edged image which lacks the sharpness and crispness.

Programs like Photoshop and other image editing programs can create enlarge an image by adding pieces to the puzzle. Envision the pieces being separated so that gaps are between each piece. The image editing program will fill in those gaps with colored puzzle pieces it things is correct. The accuracy of this is going to depend on the extent the image is enlarged. The larger the distance between the original puzzle pieces, the more pieces the software must create. TV programs like CSI will have episodes in which some forensic specialist will be able to create a clear rendition of highly pixelated images. While this is great for solving a case on TV, the truth is creating pixels that were not there is limited in it’s ability to pragmatically determine the true appearance The end result might be a softening of the image which can appear soft.

A solution is not always going to be available. Dependent on the original resolution your ability to print the image as a specific size and get pleasing results is going to be up to you to decide. When you enlarge it too much your printed photo will have that pixelated look which can detract or creating a softening effect you might not want.

What are Out of Focus Prints?

Out of focus prints are going to be caused by how the image is captured by the camera and not by the printer. Printers don’t have focus controls. Sometimes it is not obvious until you print that image large in which case the lack of focus becomes more obvious. Where we see this is primarily with artwork that is being reproduced. It could be caused by the camera not focused well on the subject, an inferior lens or the camera was not steady enough. With art reproductions you might also get a vignette effect in which the painting appears to lose focus as you move away from the center.

Some basic ways to avoid this when photographing artwork: In most cases, unless you really know your way around a camera, using the auto-mode should suffice but don’t skimp on the lighting. Provide and let as much light into the camera. Also use a sturdy tripod and take advantage of camera’s timer so that when you take the shot you do not risk even the smallest camera motion.
For out of focus prints there are sharpening features that some image editing programs will have. Don’t expect too much from them but they can help some.

What is Ghosting in a Print?

You are less likely to see this because when it does occur it is probably a mechanical issue or mistake made at the production level which is usually caught and corrected. With giclee prints and other things in which the image is printed directly to the surface by the printer ghosting can be caused when there is a misalignment of the print-heads or other hardware which is responsible for making the image . With dye sublimation such as used for things like coffee mugs to metal prints it can be caused by the transferring image slightly shifting during somewhere during the creation process. The result sometimes looks like the image has been printed twice onto itself.

Ghosting has a very distinct look so will be hard to miss by the printer technician, so the chances of this happening are relatively low.

Can you have a combination of all these affecting your print? Yes. Although ghosting is less of a problem so if you do have more than one element, it will likely be the first two. The important thing is to closely inspect your image before you submit it to be printed. And inspect it on a screen that is not too small. I have had customers tell me they do everything on their phone. If that works for you then great! But be mindful that it is easier to miss things on such a small screen.